Popularizing certain natural sciences, higher education, extensive research projects and supporting young talents, disabled visitors, incoming tourism, production events of any kind and various professional groups – these are the objectives of the new Brno Observatory and Planetarium, which is opening its doors to the public in November of this year. 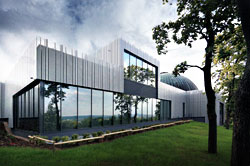 The transformation project of Brno Observatory and Planetarium began to shape up in 2006. The idea was to step out of the stereotype, find new, unexpected, overlooked or surprising forms of science education and to create a multifunctional area where science becomes passion, for scientists as well as for all Brno citizens. After four years of administrative preparations, in August 2010, the most visible change was initiated – reconstruction of the Observatory and Planetarium object itself.

The scope of works – boldly implemented by SKANSKA company, as – was truly extensive and it was actually considered as construction of a new cultural and educational institution. A third of the original building was torn down completely and as to the remaining parts, only the peripheral walls were preserved. 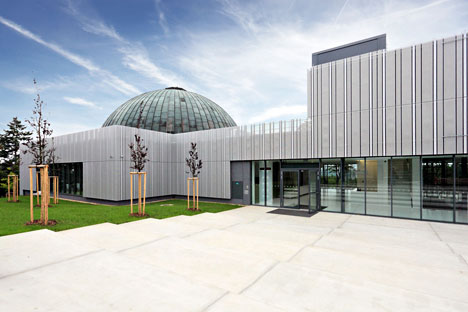 Brno Observatory and Planetarium is now completely insulated, networked and ready for a variety of installations including modern audio-visual systems. The visitors area has been extended to twice of its original size and 3.5 thousand m2 of rock material had to be extracted for the creation of the underground floors. The building houses 46.9 km of cables for data transmission and other 24.5 km of electrical wiring. Unique cladding of the building, designed by architect Martin Rudiš is decorated with 8,576,389 holes. The total construction investment reached 92.4 million CZK of which 65 million CZK came in the form of European funds and 27.4 million from the budget of the City of Brno.

Brno Observatory and Planetarium will open its doors in November this year but its full operation will start in January 2012. What can the visitors look forward to? In a way, an attraction is the building itself – designed in a modern functionalistic style. Underneath its retractable roof, new astronomical telescopes offering a unique experience to observe objects in the near and distant universe can be seen. Visitors will be able to enjoy amazing views of Brno by day and by night through the glass facade or from the large walkable terrace. The Exploratorium will offer a fascinating journey throughout the history of the Solar System . Visitors will be shown a modern view of our planet's surroundings while being able to touch meteorites with their own hands and by means of an audiovisual system, with no equivalent in Central Europe, experience travelling across space and time. The hall in the Small Planetarium used mainly in evening hours and the lecture hall, now designed for presentations of various physical experiments, have also undergone a major transformation. 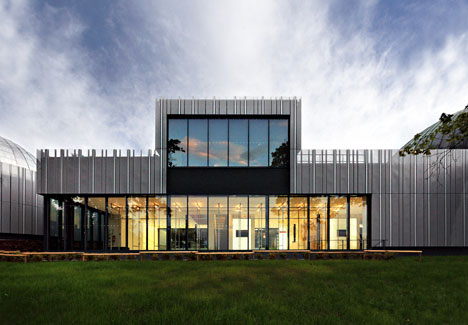 In addition, Brno Observatory and Planetarium will serve other particular events, cultural activities as well as presentations of academic and university workplaces or extensive research projects conducted within the South Moravian region. Already one of the Top destination in South Moravia, the Observatory and Planetarium is planned to be connected to a variety of cultural activities and Brno Tourist Information Centre. This up-to-date facility is ideal for medium sized conference and incentive tourism events, specialized events for sponsors and advertising or barter partners, cultural activities, e.g. theatre and musical performances and more intimate discussion meetings such as 'science-café', etc.

What the future brings to Brno Observatory and Planetarium? In the second half of 2012, a new interactive all-sky digital projection is to be installed in the Large Planetarium hall enabling visualization of any static or dynamic images (known as digital planetarium). The 50 million CZK investment will be fully covered from the operation programme Research and Development for Innovations of The Ministry of Education, Youth and Sports of Czech Republic. Adaptation of the institution's oldest part – a cupola with 7 m in diameter and implementation of Brno Stone Garden project has been planned for the year 2013. Once all work is finished, Brno Observatory and Planetarium transformation initiated in 2006 will be finally complete. At least for the next few decades.