The Art Nouveau Palace, where Hugo Haas lived, has recently been renovated.

The building, where actor Hugo Haas spent part of his life on Biskupska Street in Brno, had been near derelict for many years. The reconstruction has been carried out by a private investor who has transformed the ruin into a residential apartment building with exclusive apartments. House number eight on Biskupska Street was built in the early 20th century at the location known today as the Francis and Denis Gardens. The brothers Haas spent part of their life there – Hugo, was a well known actor and Pavel a world famous composer. There is a memorial plaque on the façade of the building as a permanant reminder of its most famous residents. 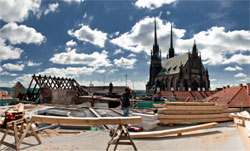 New residents of the building on Biskupska street will have a opportunity to walk through the same corridors as brothers Pavel and Hugo Haas did. After almost a year of reconstruction new life is about to return to the almost one hundred year old building. ''In the last few years this building was left unoccupied and gradually decayed. Therefore we decided to bring back the past glory of this building and offer a luxurious address to our clients together with piece of history. The building is situated in the historical center of the city only a few steps from St. Peter's cathedral and Šilingrovo Square,'' says Marek Karvaj who is a representative of the investor Real-Treuhand Reality a.s. Several of the 24 apartments in the Biskupska residence were sold one month prior to the end of reconstruction and the new owners should move in at the beginning of 2012.

The reconstruction of the historically valuable building has been meticulously overseen by Brno conservationists. Among other things, they recommended a change in the color of the facade. "A survey found that the original paint is not the well known green one, but creamy white. To preserve the historic character of the building, we decided to return to the original color. Similarly, we also followed the example for windows, which are a faithful replicas of the originals," says Karvaj. Thanks to close cooperation with conservationists and architect Vlasta Loutocká, Residence Biskupská 8 won an architects award and the prize of the professional board in the Estate Project 2011 competition. The top floor terrace which offers a unique view of Brno also contributes to its attractiveness..

"The view, which Hugo Haas once enjoyed, can now be enjoyed by our clients! The location of the Residence is entirely unique, "says Mr. Mark Karvaj. The private investor also restored the previously demolished half of the great Art Nouveau building where Haas lived and it has a new facade. A representative of the investor Real-Treuhand Reality Mr.Tomáš Jícha, director said: " Reconstruction work is more complicated than building new buildings but the result is more interesting." The house is located in the oldest part of the city center near Brno's dominant feature, which is the cathedral on Petrov hill. The company bought the building in the middle of last year. The reconstruction costs are several million Czech crowns.