I Made a Bible for Lagerfeld

Borek Sipek gleans inspiration for his work in various cultural backgrounds. He lets himself be influenced by shapes, individual elements and colours. Thanks to his unique imagination, he has created an original and immediately identifiable style. He systematically searches for unexpected contexts and intentionally invites us – the audience – to think playfully. 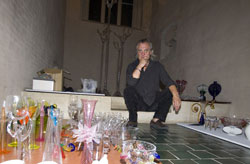 When did you last visit Brno or have an exhibition in Brno?

In recent years I have quite often spent time in Brno because I was working as a lecturer not far away – at the University of Applied Arts in Vienna. I last visited Brno approximately half a year ago. There was an exhibition of sketches for a Margrave Jobst statue in the Urban Centre; students of the Technical University of Liberec where I teach participated in the expo. I had an exhibition of my own work in the Brno House of Arts in 1998, almost in the same autumn period as now.

It is said that you are a cosmopolitan architect and designer. Was your first job architectural work?

My first job was a house for my sister. She was living in Hamburg and working as a doctor. The job was intriguing. We built a greenhouse to cover the whole house due to Building Authority limitations. It was in 1982, when green architecture was just beginning; it was a perfect fit for that period, it was really great. In Germany, there is an award called Preis für Architektur, a very prestigious prize given once every four years to seven architects – one Grand Award and six Mentions. The Grand Award went to Hans Hollein for the Mönchengladbach Museum and I was given one Mention. Nothing was implemented after that, since I moved to the Netherlands and started to work more or less for myself. I started to make designs for chairs and similar things, several exhibitions of my work were held, I went to Italy and through small exhibitions, my design career took off. I designed particularly for the Driade company, which I still work with today. Our cooperation is beautiful.

What made you come back "home"? What were your expectations at that time?

Right after 1990 I started to work as a lecturer at the Academy of Arts, Architecture and Design in Prague. I had refused to do it before because I was very busy. However, it was a task one cannot refuse, I mean helping young students. I became Chief Architect for Prague Castle two years later; I was working on interior renovations and you have to be on the spot to do that. Until then I had been flying from Amsterdam to Prague and back but then it was better to stay in Prague.

But you also ran a restaurant in Valentinská street – why a Thai restaurant?

I spent a relatively long time in Thailand. Driade and I had some plans in the country; we made new products, prototypes. Thai food is excellent and I missed it in Prague. My friends and I brought a cook from Thailand, it worked and it was great.

In our country your name is more linked to design work. I mean mainly your work in Paris where Karl Lagerfeld called you a "Genius of Design".

Yes, I designed a "pilot" boutique for him and made a bible, which was a book of layouts that guided the design of Lagerfeld's boutiques all over the world. There were six or seven of them. Once in a while, Lagerfeld chose one particular designer. At that time it was me. It was a transition period for me, but it was fruitful. Lagerfeld is a very interesting personality.

You are based in Prague but you travel from one end of the world to the other for your work all the time. You continually come into contact with new cultural and societal environments. Could you compare the approach to business in our country and abroad?

Of course I can, even though I am not a businessman myself and therefore I do not follow such a crazy schedule. But we can say that the approach is practically different. Currently, we often spend time in China. They honour European culture and they headhunt for architects and designers. There are different approaches in different cities, religion plays an important role. People in Buddhist countries behave differently than the inhabitants of Africa for example. The Chinese are hard-working; on the other hand, people in Africa look for what to do, they wait for an opportunity to come up. But it is similar here; Czech people also wait a lot...

I was captivated by a piece of information this spring related to your cosmopolitanism. It is a design for a memorial to victims of slavery in Senegal.

There is a story behind the memorial in Senegal. In 2002, UNESCO opened a competition for the very first significant memorial to dignify the memory of millions of Africans abducted from the African continent to be used as slaves. The winner was an Italian architect. Then they sent some funds for the project to Senegal, but the money was frittered away. Later an initiative was born in the Czech Republic to revive the idea. Mr. Omar Bach is an African living in Prague. We made an alternative design together, presented it in Senegal and we are currently waiting for the signature of the contract for its implementation. Mémorial de Gorée has an imposing design and should be situated on a cliff in the Senegal capital Dakar.