Decreased demand in recent years has affected both the residential property market and commercial property market development. Similarly to the situation across the Czech Republic, the market in offices and business and storage premises in Brno has seen a significant downturn and subsequent stagnation. However, we are currently witnessing a revival in developer projects in the commercial real estate sector, including office buildings, retail and also logistics premises. Considering the negative economic forecasts which have been literally bombarding us from every direction, the question is how long this clear market rebirth will last. 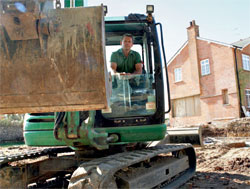 Logistic and storage premises were the first to show a revival from the stagnation, as early as last year. Although demand for retail logistics (consumer goods supplying commercial centres) continued to drop in connection with lower retail turnover as a result of decreased consumer spending, industrial logistics rescued the situation. Industrial logistics echoed increased manufacturing demand after the end of the recession and the subsequent restocking of warehouses in the manufacturing sector. This recovery, demonstrated for example by the high lease rates of modern storage premises that often exceed rates in Prague, was faster thanks to specific conditions in Brno: the dominance of logistic developer CTP and the almost complete lack of available Category A storage space. Further development of this real estate segment is expected in parts of the city known for their recent development, such as Černovické terasy, Slatina and also Šlapanice or Rajhrad.

In contrast, the recent period did not see much construction of new commercial centres either in Brno or basically in the whole of the republic. A lot of retail centres struggled with lower sales and significant differences in sales volumes became evident among commercial centres; some of them may have trouble surviving in the future. Being relatively well saturated with modern retail space, Brno can expect the expansion of existing shopping centres, new small stores to complement the local retail network and the development of retail along the main streets in the city centre.

The construction of modern office buildings also slowed down due to economic stagnation. To what extent the current recovery in construction will attract new leasers and how renegotiations of lease agreements will influence new demand has yet to be seen. A new phenomenon in the office sector of the real estate market has emerged in Brno: premises in the ambitious AZ Tower Project are to be constructed to be both leased and sold. This business concept may introduce a new market trend and an interesting investment opportunity. After lengthy delays, the CD Palace close to Benešova Street might also have an opportunity. Its advantageous location may for example help create an agglomeration of offices of authorities in the city centre. Hopefully, modern renovations of office buildings will also soon take place. The Category B office standard which has been absent in Brno would be a perfect fit for high rise buildings in Šumavská Street, for example.

Czech and Slovakian investors were the most important in keeping the market ticking over last year. Then, investors from abroad returned and sought commercial premises outside Prague once again; the sale of the Olympia retail centre in Brno may be cited as an example. However, it is still true that compared to the market in Prague, Brno offers a significantly lower number of first-class commercial premises. Therefore, neither the Brno market nor any other market outside Prague can be considered as mature, liquid and with stable yields.

Where will we see further development?

Plots of land suitable for new commercial property development are to be found particularly in the new Southern city centre presented by the EUROPOINT project. It is hard to understand why current problems with issuing the planning decision have placed this project at such great risk that construction may be hindered! How can anyone be against using the unique development potential offered to Brno citizens of future generations? Fortunately, another area of Brno's development potential – university campuses – is more promising. This is needed especially due to the fact that there are not many plots of land left in Brno that could be used for new commercial property development (there may be some in the former Kras facility in Heršpice, or a few on Vídeňská Street). After that, we will have to finally start responsibly revitalizing brownfields, the number of which is – for better or worse – rather high in Brno.

Jiří Fajkus
Vice-Chairman of the Board REAL SPEKTRUM, a. s.