The Cardiovascular and Transplant Surgery Centre in Brno ranks among the best medical facilities not only in the Czech Republic but in Europe. This year, it celebrated the 20th anniversary of its foundation as an independent facility. Approximately 100 intensive heart, liver and kidney transplantations and 1,100 cardiac surgical procedures are performed in the Brno Centre every year. The operation of the Centre is based on the work of more than 40 doctors, who have saved and retained the quality of thousands of patients' lives. 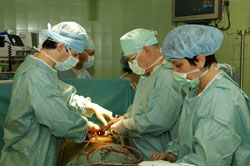 Cardiac surgery in Brno started to develop dynamically in the mid-20th century at the 2nd Surgical Clinic of the U svaté Anny University Hospital, in the department of Professor MUDr. Jan Navrátil, DrSc. (1909–1992), who has since become a legend in surgery. Dr. Navrátil led the Clinic for 15 years (1952–1967) and under his leadership, the Brno team of doctors achieved several significant firsts in the introduction of new surgical treatment methods for heart conditions. After Dr. Navrátil left for Austria, where he continued to work as head doctor in a surgical clinic and as a professor at the Faculty of Medicine at the University of Vienna, cardiac surgery was performed for another 11 years in both Surgical Clinics of the U svaté Anny University Hospital. 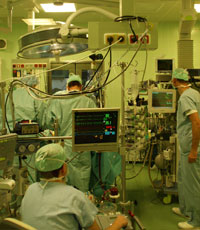 Independent cardiac surgery in Brno saw its beginning in 1978 when a new section of the 2nd Surgical Clinic was added to serve as a purpose built facility for cardiac surgeons. It comprised a catheterization ward, operating theatres, and a post-surgery department; however at that time the equipment was inadequate. The Department, which was organizationally part of the 1st Surgical Clinic, depended to a large extent on both Surgical Clinics of the hospital and this hindered it in the dynamic development which cardiac surgery was undergoing during that period. In 1984 Doc. MUDr. Jan Černý, CSc. was appointed as head doctor of the Department and under his leadership the cardiac surgery unit became an independent facility. The amount of heart surgery increased each year and the number of ischemic heart disease operations also increased significantly. The Department's equipment improved, particularly monitoring systems and respiratory ventilators. The Department later extended its focus to include liver and kidney transplantations and was consequently renamed as the Cardiac Surgery and Transplantation Department, which became the transplantation centre for the entire South-Moravia Region. In 1988, it became independent from the University Hospital and formed, together with other institutes, the Medical Research Institute in Brno. After the disintegration of that body, the Cardiac Surgery and Transplantation Department was renamed the Cardiovascular and Transplant Surgery Centre and in 1991, it became an institution directly managed by the Ministry of Health of the Czech Republic. The head doctor at the time, Professor MUDr. Jan Černý, CSc., was appointed as Director.

The 1990s were the most important period in the Centre's operation. In 1992 a heart transplant program was launched and the number of liver transplantations grew significantly. It was equipped with top-quality diagnostic and surgical equipment. These facilities and advances in medicine and surgery at that time allowed for the development of interventional cardiology, the introduction of intensive heart surgery with less physical strain on the patient, and the improvement of the quality of all diagnostic tests. The premises of the Centre underwent a complete renovation, first of the hospital wards and later the main building. There are three operating theatres in the main building, together with an intensive care unit and an X-ray facility. In the last three years, the ground-floor has been reconstructed to include a hybrid operating theatre for combined surgical and intervention procedures that is the first of its kind in the Czech Republic. Since 2007, the Cardiovascular and Transplant Surgery Centre has been led by Doc. MUDr. Petr Němec, CSc.